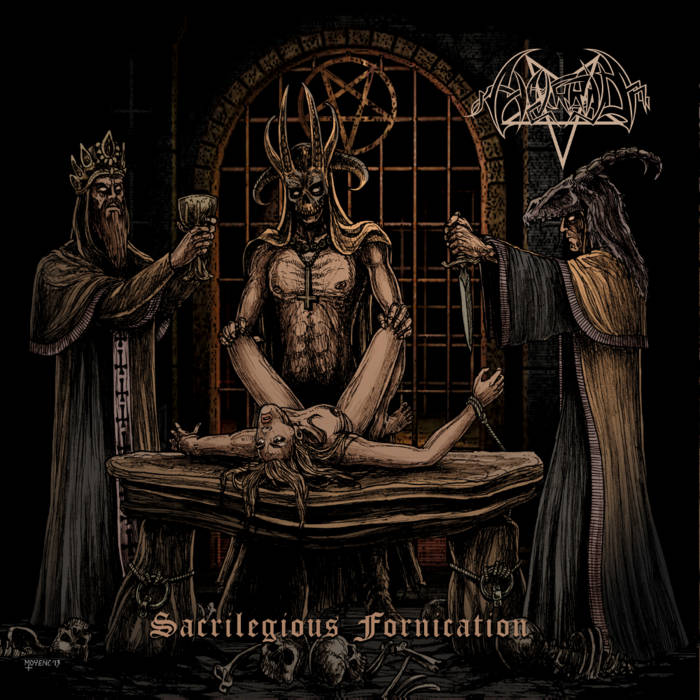 HORRID (Italy) cultivate their bleak Death Metal cult since 1989. But their new album “Sacrilegious Fornication” does not sound moldy or known in any way.

The evil guys rage through their rolling and martyring tracks in a brute and insanely sinister way. The music is variable yet unsettlingly morbid. The genre has not produced something of similar quality in years! Fans of satanic Death Metal can finally relax: HORRID are right down the alley of DEATH, AUTOPSY or ENTOMBED. They keep the darkness alive !

Dunkelheit Produktionen releases the new album on CD, with an exclusive artwork by Cristophe “Thorncross” Moyen. The songs were recorded in the swedish Sunlight Studios (KATATONIA, TIAMAT, ENTOMBED, DISMEMBER and many more) by Thomas Skogsberg and were mastered in the Occultum Studio in Biella, Italy. The album contains an exclusive HELLHAMMER-cover (“Massacra”) and a special guest appearance by Johan Johannson (INTERMENT) !

All songs performed by Horrid (music composed by Belfagor and lyrics written by Riccardo, except “Massacra” originally by Tom G. Warrior and Hellhammer).